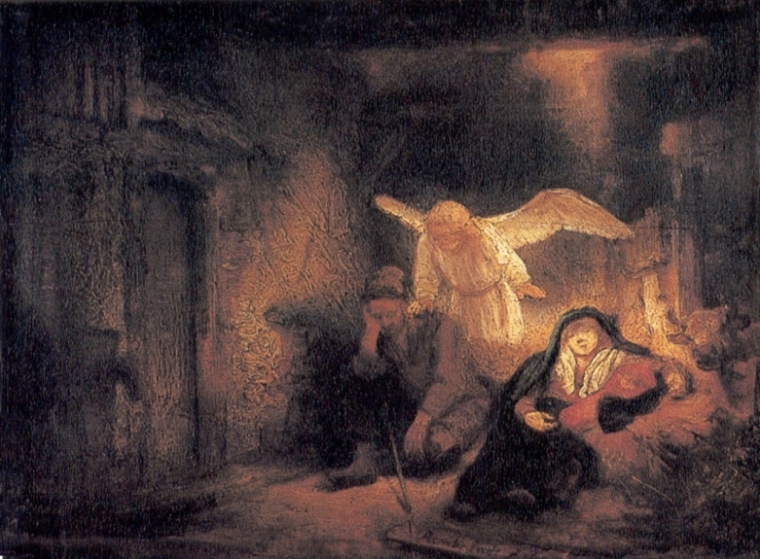 Joseph’s Dream at the Stable in Bethlehem  ~ Rembrandt

In the sixth month the angel Gabriel was sent from God to a city of Galilee named Nazareth, to a virgin betrothed to a man whose name was Joseph, of the house of David. And the virgin’s name was Mary. And he came to her and said, “Greetings, O favored one, the Lord is with you!” But she was greatly troubled…And the angel said to her, “Do not be afraid, Mary, for you have found favor with God. And behold, you will conceive in your womb and bear a son, and you shall call his name Jesus…And Mary said to the angel, “How will this be, since I am a virgin?” (Lk. 1:26-34).

It wasn’t heroic so much as it was impulsive. It just seemed like the only appropriate response to the moment’s need. For weeks, Keldy and I had been talking through a situation with a young gal we were mentoring who was walking through a situation with her friend. Her friend was expecting, it was unexpected—an unplanned pregnancy. The alleged father was not answering the phone. Time was ticking.

She was terrified to get an abortion but more terrified not to. Besides the fact that her secret life would soon swell up and announce itself to the world, she would inevitably be kicked out of the Christian University she attended. And when she finally decided to confide in her mother, entertaining the notion of proceeding with the pregnancy despite the costs of doing so, her mother told her she would be left on her own, unsupported, if she got kicked out of school—because that was the most pressing issue.

Our mentee told us that day her friend believed, ironically enough, she was left with “no choice” and so scheduled an appointment at the abortion clinic for the following week. In her mind, it wasn’t a pro-choice decision; it was a no-choice situation. Having no one else she could trust, she had asked her most loyal friend if she would go with her, if she would support her through it all, because “I cannot do this by myself.” It was just a wrenching mess. Now her friend, our mentee, was confiding in us. And my half-hearted, half-brained offer missed the point altogether. It was based on the assumption that this girl didn’t want her baby. She did want her baby. The problem was that no one else wanted her baby—not the father, not her mother, not her Christian academic overlords—and neither did they want an unmarried-and-with-child version of her.

What struck me as I mulled over the situation that day and many days since is that the reason a little baby would end up being aborted by the person it depended on for life is that that baby’s mother was under the threat of being aborted by the people she depended on for life. It indeed takes a village to raise a child; it takes a village to murder one too.

And so God forms a village to raise Mary’s Child, God’s Son, while Herod sent an army to abort Him (Mt. 3:16). It was an unplanned pregnancy, at least as regards the young couple’s plans. They had been planning for a wedding but would now have to plan for parenthood. Their only conceivable plan for parenthood up to this point was to become a father and mother after becoming husband and wife, and only after that. But now we have something like a pregnant nun situation. And just as pregnant nuns become ex-nuns, pregnant virgins become ex-virgins, which is grounds for Mary becoming Joseph’s ex-fiancé.

Culturally, Joseph should expose her shame and leave her at the disposal of the community and her unborn child’s father. But she, along with the entire human family from Adam, was already at the disposal of her unborn Child’s Father. And He was going to make sure that she could proceed with the pregnancy without becoming an ex-anything. She need not not fear, for she had “found favor with God” (Lk. 1:30). This young virgin was about to give birth to the Eternal Son.

“Joseph was a righteous man and did not want to shame her” (Mt. 1:17), but he still wanted to leave her. So God sent an angel to explain the situation and to make sure he took care of her. And Joseph did so until (presumably) he died. She would then, a widow, have to depend on her Son. But He would die young too. Under ordinary circumstances, this would render her among the most vulnerable of society, second perhaps only to the unborn. But on that fateful day, as she knelt weeping at her Son’s high hanging feet, his final provision before saving the entire human race was to ensure his mother would be taken care of:

The Church of Jesus Christ, I believe, must be pro-life, but we must be pro-life in the way Joseph was pro-life at Jesus’ conception and the way the Beloved Disciple was pro-life at Jesus’ death. We must embrace the life of the unborn precisely by embracing the life of the mother. Churches throughout America have exactly the same amount of opportunities to abort young women (not to mention young men and young couples together) in need of our support as young women have to abort babies in need of their support. We cannot directly prevent the nation’s abortions, but we can directly prevent our own. And we have every reason to believe that when a community of love and support makes the sincere and sustained effort to gather around young women and couples in a way that demonstrates they are wanted and valued and supported, in a way that assures them they won’t be left alone to try to raise their children all alone, we will prevent far more abortions than we ever could by making a commensurate effort to surround ourselves with other people who agree that abortion is wrong, no matter how loud we shout it. (If you want some hard evidence to support this, see the postscript below!)

If Christ shares the burden of human death, surely he can expect us to share the burden of human life, whether that means adopting babies or adopting mothers—for we all are adoptees (Rom. 8:15; Eph. 1:5). And while this may or may not require a formal adoption process, it will require an effort to make room for others in our lives in very tangible ways. It will require welcoming young women and men into our homes and to our tables, into conversations, into mentoring relationships, friendships, and into our gatherings, and doing so before they find themselves in such desperate situations. But it also means welcoming young women and men in precisely the same way after they find themselves in such desperate situations. It means being committed to making room for others’ lives so that they can commit to making room for life when it comes, planned or unplanned, because this is always God’s plan for human life.

Indeed, God’s ‘planned parenthood’ for the whole human race began with a little Galilean village that committed to raising a Child as though he were their own, only to later discover that through this Child God would raise them, would raise all of us, as though we were children of His own. Because in Jesus Christ “that is what we are” (1 Jn. 3:1).

“For to us a child is born,
to us a son is given;
and the government shall be upon his shoulder,
and his name shall be called
Wonderful Counselor, Mighty God,
Everlasting Father, Prince of Peace” (Isa. 9:6).

With her permission and blessing, I am including a text conversation I had with a young gal named Clara late last year who was in my youth ministry back in Kentucky and whom Keldy and I discipled for a number of years. It begins much in the same way the conversation I opened with began. But it doesn’t end the same way. The difference: the unconditional love of Clara’s parents, the baby’s father, and a couple of amazing mentors, Anne Corey and Maria, who, in her words, kept “by [my] side” throughout the process, even when she was convinced she was going to terminate that process. I’ll let the texts and the closing picture speak for themselves.

By this time, I had already long been in correspondence from WA with Anne Corey and Maria in KY (we were all loving Clara behind her back). We decided at this point it was necessary to tell Clara’s parents, against Clara’s request not to. Anne Corey gave her an ultimatum–if Clara didn’t tell them, she would. Well, Clara didn’t, and she did. And Clara, in her own words, “hated” Anne Corey for it (she doesn’t hate her anymore). But in stark contrast to the response from the parents in the story above, for Clara’s parents the immediate and ultimate–the only–issue was ensuring that baby lived! The issue wasn’t the potential impact it would have on Clara (or them) financially or educationally, nor was it maintaining a nice Christian facade for fear of what others might think (how many baby’s die for just that reason?!). So Clara’s pregnancy was met with a village-full of unwavering support and unconditional love from her parents. She later told me that if Anne Corey hadn’t told her parents, she “guaranteed” the outcome would’ve been different. What outcome?

Below is the next text I got from Clara:

Well, they ended up deciding against adoption. Here’s my most recent update.

Meet Clara and Henry and their little redhead bucket of joy, beaming with life, Beau Daniel 🙂

To Clara and Henry, Tim and Tracy (Clara’s parents), Anne Corey and Maria (Clara’s mentors), thank you for showing us what it truly means to be pro-life in the way Jesus is pro-life: through sacrificial love. May your story inspire us all to love people into life the way each of you contributed, together as the family of God, to loving little Beau into life.

And especially to Clara: may your joy only continue to increase and your life become a living example and beacon of hope for the countless number of other young women who find themselves facing an unplanned pregnancy. May they face their pregnancy with the same courage and love and dignity you have shown in all this. God bless you and your beautiful family!